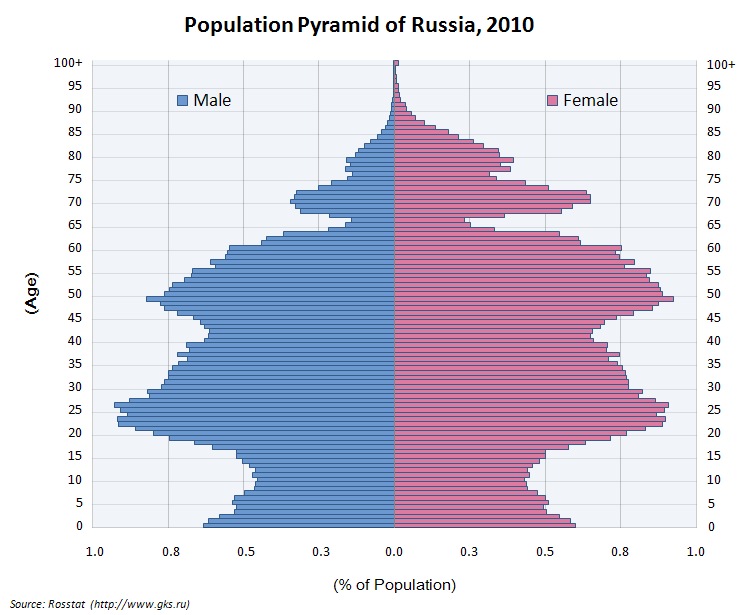 The chart below demonstrates the distortion in the population balance in men and women as a result of the deaths caused during World War II from 1941 to 1945 in the former Union of Soviet Socialist Republics, now known as Russia.

The impact of the death of 30,000,000 Russians, including its western border nations, from 1937 to 1945 is clearly illustrated in this chart.  The point on which to focus is in the 65 to 90 year old age category and the loss of males compared to females and its impact on Soviet life in the last third of the 20th century.

The loss of so many men in the subject age groups has had a catastrophic affect on Russian life in all aspects; social, industrial and military in the post-war period.  This imbalance was first experienced in the explosive rate in juvenile delinquency.  The records of police arrests, incarceration rates and levels of hospitalization for treatment alcohol, and later drug, abuse all grew out of proportion compared to the population statistics of the other combatant nations of World War II.  The absence of fathers to provide the stable and disciplined family environment necessary to raise children, especially the male children, was the primary cause of this growth of  unstable families.

In addition to the loss of the traditional leadership role of the father in the family environment was the loss of income required to properly support the family as well as to provide the emotional and physical support to the women raising these families alone.

The Russian experience above was also reflected in postwar Germany, however the impact on the family and the nation was cushioned by aid and support from the western democracies in the form of economic aid in programs such as the European Recovery Plan, more popularly known as the Marshall Program.  With the political realities of the period, the Soviet Union was not included in the recovery plan as it rejected all of its provisions vis a vis German economic rehabilitation.